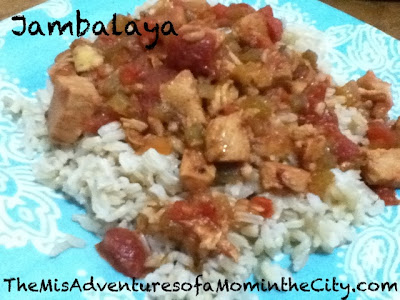 I am always reminiscing about different dishes that remind me of growing up in Louisiana, and trying to make them into my own .  Seafood is a major staple in the gulf but the Mr. is allergic to shellfish so I can't always make dishes just as I remember them, so I usually put my own spin on them.
Jambalaya is a creole dish.  It has a mix of both French and Spanish origins.  It's a dish that originated in the French Quarter, and was actually an attempt to make the Spanish dish paella.  Since they didn't have saffron they used tomatoes instead.
Jambalaya is usually made in three parts which are the vegetables, the famous holy trinity,  the meats, the stock and rice.  There are many different variations, there is a Cajun version which doesn't not have and tomatoes.  It's more of a brown Jambalaya.
What I chose to make for my family was a simple chicken jambalaya.  It was very easy to make and it didn't include anything my picky eaters would object to.
Jambalaya
serves: 8
prep time: 20mins
cook: 55mins


Preheat over to 350.
Heat oil in a large dutch oven .  Brown chicken on both sides.  Set aside in a plate.  Add onion, celery, bell peppers, garlic, oregano, salt and tomatoes paste to the pot.  Cook for about five minutes until onions are tender.
Add tomatoes and chicken stock, bring mixture to a boil.  Remove from heat.  Add chicken to mixture cover and bake for 40 minutes at 350.  Remove from oven and serve over rice.
﻿
﻿
﻿
Email Post
Labels: chicken Jambalaya Louisiana recipe