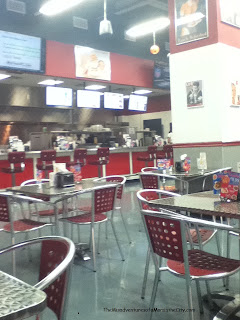 I don't know who loves an all day shopping trip more, me or my kids.  For them not only do they get to shop for something new,  but they get breakfast, lunch or dinner depending on what time of day it is.  For weeks I had been telling them about a Johnny Rockets opening in  the East River Shopping Plaza, so I finally decided to let them check it out. 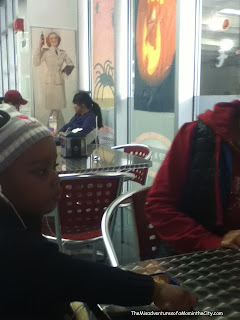 It was pretty early during when we went somewhere around the start of lunch.  The restaurant was pretty empty.  There was maybe two other groups of people there when we got there, one group was eating food from the downstairs restaurant that was connected named Kafeteria.  I was glad that there wasn't a huge crowd because I wasn't sure what type of day the kids would be having at that point. 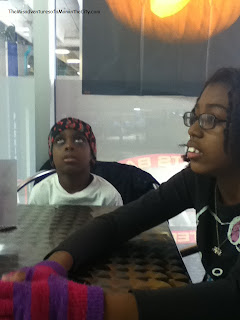 My two year old immediately expressed how hungry she was as soon as we got there, so we promptly went about the business of ordering our meals.    We seated ourselves, and fumbled through figuring out how to order.  We ended up going to the counter to get the menus and brought them back to the table so that everyone could decide what they wanted.  My teenager who was the only one of my kids who has ever been to Johnny Rockets already knew what she wanted.  She ordered the chicken club sandwich with no bacon.  My son had the mini hot dogs.  I could tell that he felt like he scored with    his choice.  My ten year old and two year old decided to get a sharable meal  with mini corn dog bites, boneless bbq wings, and fried macaroni bites.  I of course had the famous original Johnny Rockets burger. 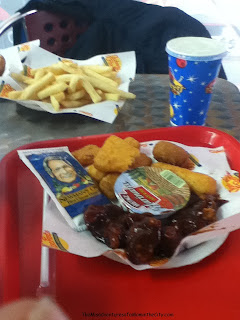 Since it's the middle of the winter I decided we wouldn't have shakes this time.  But definitely if we make another trip. 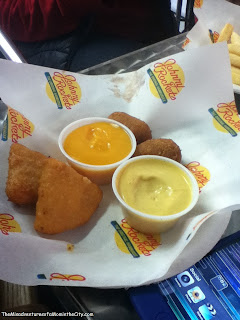 We took the menus back to the counter and placed our orders, then went back to the table and waited.  The Johnny Rockets workers were very nice. 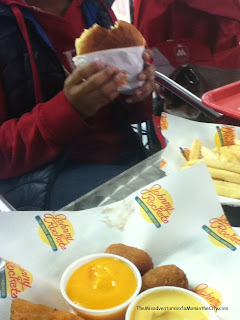 We sat and joked around for about 20 minutes, watched a little bit of the basketball game that was on one of several television screens overhead, before a one of the guys from behind the counter brought us our food and drinks.  I have to admit that the food was delicious and everyone enjoyed what they ordered.  The food was fresh and hot when we go it. We didn't have to go back to the counter to get anything.  We sat and enjoyed our food and just as the kids started to finish eating and begin bickering with each other, more people started to trickle in. Since I  had paid a very modest $44.00 for our food when we ordered, we dumped all of our trash and headed to the plaza for some shopping. 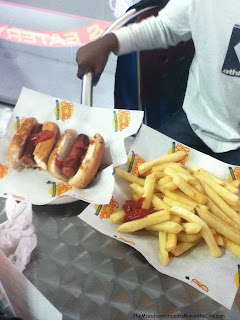