Today my little Kitty Kat turned 2.  It seems like only yesterday I was being admitted to Weill Cornell for hospital bed rest.  I was on bed rest for twenty three days.  Twenty three days of doctors asking me every morning if I was having any cramping, a bloody show, yada,yada,yada.  My wonderful SO was sitting there with catering to my every need, my son with a family member and my girls were in Kansas City.  As I was reading a magazine I started to feel what I thought were labor pains. Because I was laying there so calm, still reading the magazine I guess my SO didn't believe me.  So after about an hour nothing significant had happened and off he went to work.  I got up go to the bathroom about an hour later and there was the bloody show.  At this point I was only 27 weeks.  I had made my peace with the situation once I had passed the 23 week point and was confident she would remain in the head position since she had been that way for weeks.  I was given steroids the day I was admitted. During the previous two weeks I had learned that I had gestational diabetes, and I was learning how to give myself insulin every night because my fasting blood sugar was too high.  I was doing exercises in bed to make sure that I did not get blood clots.

The nurse came and checked out the situation and my attending came to check out the situation as well.  Sure enough after an impromptu exam on the bedpan almost immediately I was off to labor and delivery.  I only had a little ways to go and I ended up in the same delivery room that I had given birth to my precious angel Paige the previous September. I was in labor for hours, with IVs in both hands one for my insulin every hour, magnesium, surfactant, and whatever else they were giving out. For about three hours I toyed with the idea of going natural but the anesthesiologist made the epidural sound so great I gave in. Dad had made his way back from work since he was only blocks away. At around 1am we hear a little popping sound and my water and finally broke. They called the neonatal team and we were ready to go. I pushed a few times and then I heard my tiny bundle of joy cry. The nurse who took her away thanked her for crying and that made me cry. Right then I knew she would be okay. Although she only weighed 2lbs and 5ozs she was quiet feisty. She was breathing on her on right from the start, but they gave her a little support as well.

She spent her first 3 months of life in an isolette.  We visited as often as we could sometimes I spent the entire day with her and I even slept in the family lounge when she has to get a blood transfusion.  I pumped day and night until I could nurse her.  I kangarooed her as often as possible so that she could feel my warmth and carry my scent even when I was away.  Two years later and she I a walking, talking, still feisty miracle.  She has discovered a love for Elmo and Bubble Guppies.  Happy Birthday little Princess!!!!! 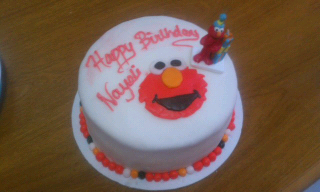